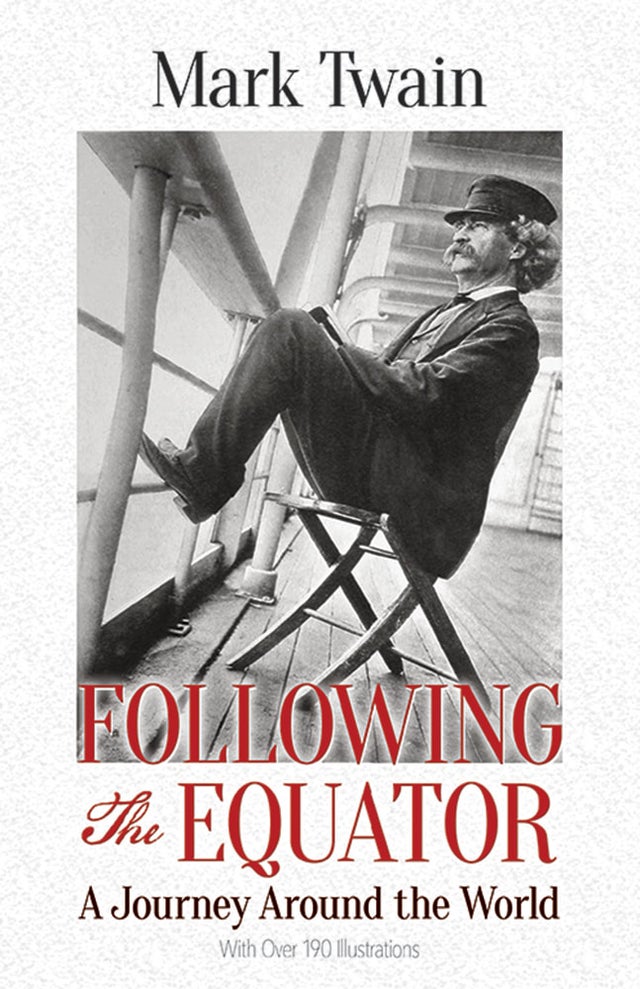 Dover~Following the Equator: A Journey Around the World

"We sailed for America, and there made certain preparations. This took but little time. Two members of my family elected to go with me. Also a carbuncle. The dictionary says a carbuncle is a kind of jewel. Humor is out of place in a dictionary." — Following the Equator

So begins this classic piece of travel writing, brimming with Twain's celebrated brand of ironic, tongue-in-cheek humor. Written just before the turn of the century, the book recounts a lecture tour in which he circumnavigated the globe via steamship, including stops at the Hawaiian Islands, Australia, Fiji Islands, New Zealand, India, South Africa and elsewhere.

View the world through the eyes of the celebrated author as he describes a rich range of experiences — visiting a leper colony in Hawaii, shark fishing in Australia, tiger hunting, diamond mining in South Africa, and riding the rails in India, an activity Twain enjoyed immensely as suggested by this description of a steep descent in a hand-car:

"The road fell sharply down in front of us and went corkscrewing in and out around the crags and precipices, down, down, forever down, suggesting nothing so exactly or so uncomfortably as a crooked toboggan slide with no end to it. . . . I had previously had but one sensation like the shock of that departure, and that was the gaspy shock that took my breath away the first time that I was discharged from the summit of a toboggan slide. But in both instances the sensation was pleasurable — intensely so; it was a sudden and immense exaltation, a mixed ecstasy of deadly fright and unimaginable joy. I believe that this combination makes the perfection of human delight."

A wealth of similarly revealing observations enhances this account, along with perceptive descriptions and discussions of people, climate, flora and fauna, indigenous cultures, religion, customs, politics, food, and many other topics. Despite its jocular tone, this book has a serious thread running through it, recording Twain's observations of the mistreatments and miseries of mankind. Enhanced by over 190 illustrations, including 173 photographs, this paperback edition — the only one avai1able — will be welcomed by all admirers of Mark Twain or classic travel books.