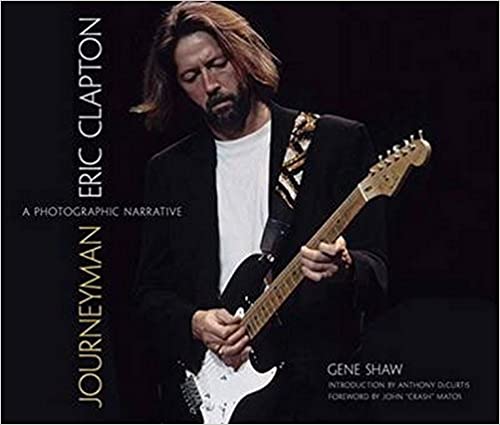 "Perhaps the quintessential Eric Clapton scrapbook of remembrances with cool photos to mark each venue. I loved the addition of play or set lists and guest appearances. Awesome book for fans of Eric." — Ausable River Arts

For over five decades, Eric Clapton has ranked among rock's premiere guitarists — and since the early 1980s, famed music photographer Gene Shaw has been capturing great moments from Slowhand's electrifying career. More than 150 of Shaw's rare color and black-and-white photographs offer a front-row fan's perspective on many legendary musical events. Highlights include Clapton's performance at the 1983 ARMS benefit; the 1992 show with Elton John at Shea Stadium; the 2005 Cream reunions at the Royal Albert Hall and Madison Square Garden; several appearances at the Rock and Roll Hall of Fame induction ceremonies; and the current Crossroads Guitar Festivals.

The majority of the photographs have never been published before and capture rare and intimate moments between Eric and his fellow musicians not seen anywhere else. These artists include some of the biggest names in the business, so there are also exclusive images of Jeff Beck, Jimmy Page, Joe Cocker, Keith Richards, Albert Collins, Bob Dylan, and other superstars.

Shaw provides a commentary on each show, recapturing the emotionally charged moods of venues ranging from small clubs and theaters to vast stadiums and arenas. Notes on the performances include a partial band lineup and complete set list. This unique retrospective includes an Introduction by Rolling Stone writer Anthony DeCurtis and a Foreword by John "Crash" Matos, artist and designer of some of Clapton's signature guitars.