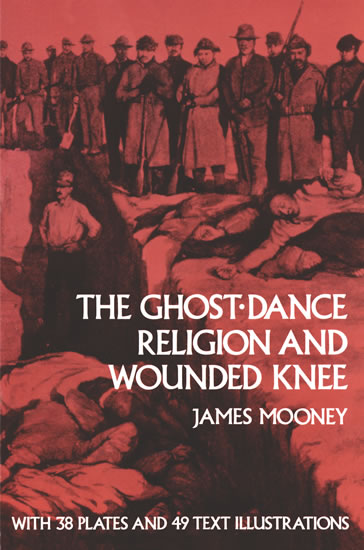 The Ghost-Dance Religion and Wounded Knee

Immediately following the massacre of Wounded Knee (December 29, 1890), the well-known anthropologist James Mooney, under the auspices of the Bureau of American Ethnology and the Smithsonian, investigated the incident. His interest was primarily in the Indian background to the uprising. Admitting that the Indians had been generally overpowered by the Whites, what led the Indians to think they stood a chance against White arms? His answer was astonishing: the Ghost-Dance Religion.

Investigating every Indian uprising from Pontiac to the 1980s, every Indian resistance to aggression, every incident of importance, Mooney discovered a cultural pattern: a messianic religion that permeated leaders and warriors from Tecumseh and his brother The Prophet on up to the Plains tribes that revived the Ghost-Dance in the 1880s and 90s. The message was: abandon the ways of the Whites; go back to Indian ways; an Indian messiah is coming; the Indian dead are to be resurrected — indeed, some have already returned; and the Whites are to be killed by the Spirits.

Mooney made an exhaustive study of this cult, the rise of its latest version, diffusion to the Plains, and its relevance to the medicine man Sitting Bull and others. Citing many primary documents as well as anthropological data he gathered himself, Mooney gives an extremely detailed, thorough account of the cult; its songs and dances, ceremonies, and its social impact.

This work has always been considered one of the great classics of American anthropology, a book that not only offers an account of a very interesting cultural phenomenon, but also throws light on many events in Indian-White relations that are otherwise dark. Its data have never been superseded and the book remains a work of primary importance in Native American studies.Reprint of The Ghost-Dance Religion and the Sioux Outbreak of 1890, Part Two of Bureau of American Ethnology Report XIV, 1896.

Sold out
Add to Cart