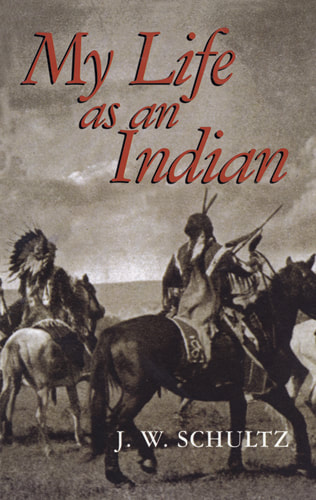 Dover~My Life as an Indian

In this fascinating memoir, first published as a book in 1907, the author recalls the remarkable story of his journey westward as a young man to the Montana Territory. Traveling in the days before railroads crossed the continent, he sought wild life and adventure and found both among the Piegan Blackfeet.

As a welcome guest of the Indians, J. W. Schultz took part in almost every aspect of tribal life, enabling him to write vivid and dramatic descriptions of buffalo hunts, war parties, daring raids on enemy quarters, and other adventures; but he also paints a detailed picture of the quieter side of life in the vast encampments of lodges that dotted the plains: religious ceremonies and customs, child-rearing, food preparation, burial practices, tales told around the campfire, and much else.

The author’s sensitive commentary testifies to his deep love and affection for the people with whom he lived, among them Nät-ah’-ki, the young and beautiful Blackfoot girl who became his wife; Ashton, an Easterner with a secret sorrow; Diana, an orphaned Indian girl, who, as Ashton’s loving ward, received a proper education but met a tragic death; and Berry, a tall, fearless Indian trader of mixed blood who became the author’s long-time friend.

Spanning a period in American history that saw the Indian way of life dwindle to near extinction, this extraordinary firsthand account of a white man’s experiences in the word of the Plains Indian will not only captivate general readers but will also appeal to ethnologists and students of Native American life and culture. A new Introduction by Hugh A. Dempsey, Chief Curator Emeritus, Glenbow Museum, Calgary, Alberta, provides biographical information on the author and traces the book’s publishing history and cultural impact.Reprint of the Doubleday, Page & Co., New York, 1907 edition.